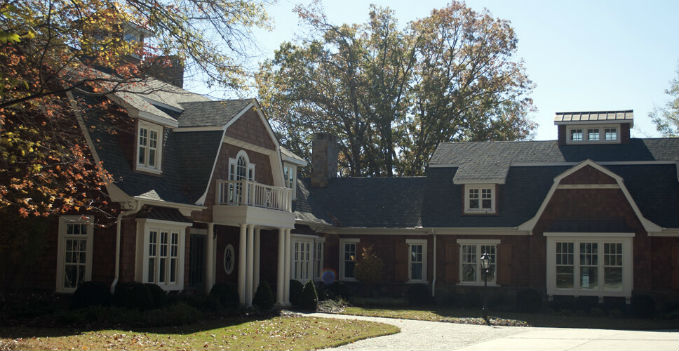 In densely populated lake areas, often the only way to get a fantastic lot is to buy one that already has a house on it. When this property was purchased on Lake Wylie, it came with a dated L-shape house that had a low, overhanging brown roof, brown siding, brown doors and brown windows. There was a wide drainage ditch surrounding half of the house that sat a foot below grade. But, the unattractive house also came with a long, private driveway with a picturesque approach to the property, a flat lot with large oaks and 378 feet of shoreline, which includes a small beach.

The existing structure was actually a house inside a house. As it originally stood, it was a 50s river cabin that faced Big Allison Creek and accompanying boat house that faced the adjacent cove. Instead of tearing down the small cabin and , the previous owners built over and around them, joining the two with the L-shaped ranch.

To create a permanent residence, it was obvious that most of the old structure would have to be replaced. However, building on the original foundation would allow the new structure to be grandfathered in and allow it to be rebuilt close to the water. Some places are only 15 feet from the shoreline, offering wonderful views of the lake.

The inspiration for the L-shape footprint came from the works of Robert Stern, a famous American architect, in order to create an authentic Dutch Colonial Revival, which was popular in the Northeast in the 1920’s and also common to The Hamptons. It is a dressed-up version of its colonial ancestor and is occasionally referred to as a “barn house” for its charming, steep double-pitched gable roof with flared eaves. It was a typical style built by Dutch settlers who settled New York in the 17th century. The steep roofline provides space for a complete second story, but allows the house to be classified as a one-story, which had lower tax rates. Demolition of the original house only took two weeks, but construction of the new house proceeded more slowly. There was an attempt to retain as much of the original house and materials as possible by recycling or reusing whatever possible, but existing sub-flooring had to be repaired and leveled to even out the earlier years’ construction. Foundations needed beefing up and waterproofing, and existing walls had to be increased in height. An extensive grading and drainage system was installed in the front yard to catch or divert runoff.

The house was constructed in an attempt to earn LEED certification and was subject to many additional regulations, like protecting existing trees from damage during construction and providing recycling bins for workers to dispose of water bottles and cans. Every attempt was made during both the design and construction phases to construct the house to meet the LEED requirements for a modern, green house, as well as a stylish, historically-based structure.

The final product, as approached from the driveway, is a fairly traditional replica of a Dutch Colonial Revival, with two symmetrical wings comprising the finished L-shape house and each ell having bays, double-hung windows, shed dormers and chimneys flanking the ends. However, the rear, or lakeside, of the house is expansive, with interesting rooflines that cover the porches and room additions. Tall windows and French doors, topped by transoms, wrap the entire rear, which offers views of the lake from every room in the house. There are many doric columns, porches with balustrades, large palladian windows and corbels that are all painted white to contrast with the natural cedar-shake and stone-clad structure. Two cupolas, one topped with a copper weathervane of a Blue Heron, a bird that frequents the nearby cove, top each ell of the house and can be lit at night.

Lynn Blackwell is an allied ASID interior designer, a SC licensed builder and the owner of Main & Gray Home located on Main Street in Fort Mill. She received a BS in Accounting from USC and a BFA in Interior Design from Winthrop University. She is married with two grown children and resides in the Lake Wylie area.