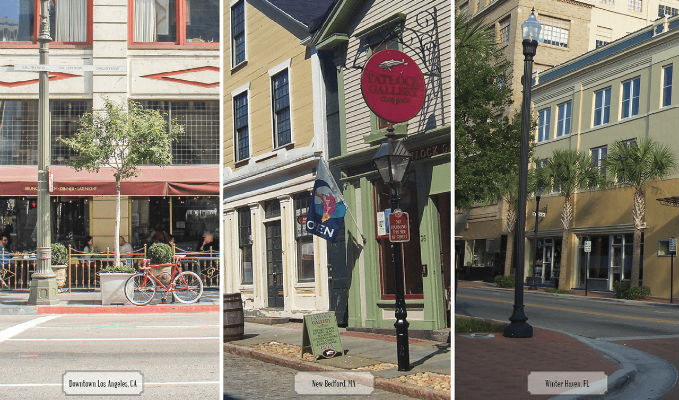 BRINGING IT BACK WITH WINE AND SOME PAINT

New communities in historic districts and Main Streets are formed from the admiration of a communally claimed history and future that is still being formed. The duties and obligations in these communities are first taken on by the truest believers, volunteer labor, and evolve into organized non-profits. Once organized, business, investment, and money can be lead back into the city and local economy.

This evolution can be seen today in three cities across the United States: Downtown Los Angeles, California; New Bedford, Massachusetts; and Winter Haven, Florida. Each city is in a different stage of revitalization, however, each city reflects the community that revitalized it. We are what we build and the connection cannot be detached.

“Honestly, I just wanted to live in a city that met my urban fantasy. My timing was perfect as there was a collective conscience building that wanted to add density and vibrancy to Downtown,” said Blair Besten, Executive Director of the Historic Core Business Improvement District in Downtown Los Angeles.

Downtown Los Angeles, much like its population, has been slow to grow out of its infancy. Residential development has risen over the last twenty years. Six years ago, there was a boost of interest in the South Park district with the opening of L.A. Live, an entertainment destination.

The Historic Core district, the city’s original Bank District and Entertainment Corridor, has been the most influential revitalization district. Many of its buildings were designed by John Parkinson in the early 20th Century and built to the city’s limit of twelve stories. These skyscrapers were to match the grandness of the theatre palaces on Broadway within the district and were to compete with New York’s Broadway.

The decadent displays of the wealth and faith in the city that streamed into the newly metropolitan Downtown Los Angeles only lasted forty years. By the late 1950s, the banks moved to nearby Bunker Hill and the residents moved to the suburbs. For nearly fifty years, the original bank buildings were left empty and the theatres fell into disrepair.

During the 1990’s, the old bank buildings were bought by individuals and families seeking long-term investments. Abandonment for nearly fifty years meant that the new owners were not heavily policed by city officials in the beginning and the buildings were slowly filled with artists looking for cheap rent.

A needed component in bringing a community back to life is property ownership that understands the relationship between revival, arts, walkable streets, and a tenant's willingness to live there. Tom Gilmore of Gilmore Associates is one property owner that understood these components. Gilmore renovated three notable Historic Core buildings: San Fernando, Hellman, and Continental. 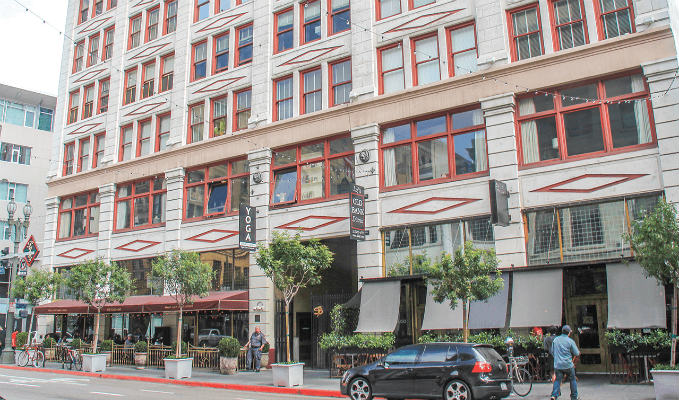 The San Fernando used to boast being one of the most elegant office buildings in Los Angeles. The stunning Italian Renaissance Revival has been renovated into seventy loft apartments with the restaurants Ledlow’s and Baco Mercat on the ground floor.

The Continental is known as the first skyscraper to enter the Los Angeles skyline and is adorned with terra cotta, lionheads, and pediments; it has also been renovated into lofts.

The Historic Core neighborhood sought foot traffic for their developing artist neighborhood. The Downtown Art Walk began as a neighborhood initiative over a decade ago to introduce the newly minted Gallery Row to audiences and eventually became a nonprofit. Today, this self-guided art tour attracts nearly 50,000 visitors and has shaped outsiders’ views on what Downtown can be for Angelenos. The Art Walk was the first event that brought people back into the city and encouraged them to explore the streets and the art organically.

In the past year, the landscape of Downtown has drastically changed. People fill the streets after sundown and new hotels are opening that strive to be a part of the arts and culture community. The Ace Hotel Downtown Los Angeles opened in the old Artists United Theatre and embraced the building’s history to establish itself as an entertainment and cultural landmark.

As Downtown leaves its infancy, its growth will be dependent on the community who creates its identity rather than the commercial real estate developments that create the skyline.

NO MORE WHALES, PLENTY OF ART WITH YOUR SEAFOOD

New Bedford, Massachusetts was one of America’s most important whaling ports in the 19th Century, and by extension one of the world’s richest towns. Prior to the invention of electricity, nearly all lamps were powered by whale oil. Located on the southern coast of Massachusetts, the city’s cobbled streets were also the setting for the opening of the book Moby Dick, by Herman Melville. The Seaman's Bethel, a chapel immortalized in the book, stands today as a part of New Bedford Whaling National Historical Park.

The former president of The Waterfront Historic Area League (WHALE), Sarah Delano once said, “if you bulldoze your heritage, you become just anywhere.”

Through the use of grants and other funds, for over fifty years, WHALE has partnered to save more than 50 historic structures and led the establishment of the New Bedford Whaling National Historic Park.

In allowing for architectural renovation and preservation, the New Bedford area has been infused with a new sense of integrated arts and culture. The most pronounced architectural save was the last grand cinema of New Bedford, the Zeiterion Theatre. The theatre was going to be flattened into a parking lot, but was remodeled and reopened as a performing arts center in 1982.

New Bedford now has the largest per capita artist population in the nation. It has drawn artists from the greater New England area, including the nearby Rhode Island School of Design, with lower rents than within the city center.

As the city transitioned into an artist’s city, nonprofits were founded to bridge the artists’ efforts and to draw future business back to the cobble stoned streets. WHALE, AHA! (Art, History & Architecture) and New Bedford Art Museum/ArtWorks latest collective project is a multi-use three story building at 139 Union Street that will be restored and converted into a ground floor gallery, artist studios, nonprofit coworking spaces, and artist live-work spaces.

AHA!’s main initiative is a monthly arts and culture evening in downtown that focuses on individual artists and projects. The event also contributes to the city’s image as an arts and cultural destination that can be paired with seafood dinners brought in straight of the boats.

Visitors may discover New Bedford on their way to Martha’s Vineyard or the nearby islands, but more of them are making the city a part of the trip and giving the city the revenue it needs to continue building the community it already has.

OLD TOWN FLORIDA IS ONCE AGAIN

When people think of Florida, their mind usually goes to Miami Beach or Disney World. Florida is more complex than young tanned bodies and burnt tourists in Disney gear. Saint Augustine is the oldest city in America and several regions throughout Florida were a part of creating the first Main Streets of America. Thirty miles southwest of Disney World sits The City of Winter Haven, a fully revitalized and designated “Florida Main Street City.”

Winter Haven was home to America’s first theme park, Cypress Gardens, which opened in 1936. The park began to decline when the nearby Disney World opened in 1971. The property changed hands and names over the next thirty years and the economy of the surrounding town also suffered. Most businesses and residents had left by the 1980’s and the downtown area fell into disrepair. In the mid-1990s, local property owners saw an opportunity to stimulate the local economy and arts by investing in themselves.

Six/Ten, a local Winter Haven commercial real estate investment group, bought more than half of the downtown area. The buildings were stripped of their interiors and refitted for contemporary medical and professional needs. All the buildings retained the original facades to keep the feeling of the Main Street intact. The investment group is wholly owned by local residents who see the opportunity in embracing your ambition by restoring your community.

As the movement grew to incorporate more of the town, the emphasis on preserving buildings’ facades and signage was maintained. The oversight transitioned to a nonprofit that could create grants for local property owners.

The town officiated its plans in 1995 by establishing the nonprofit Main Street Winter Haven that would begin working hand in hand with the city on its National Main Street Approach to revitalize its town center. 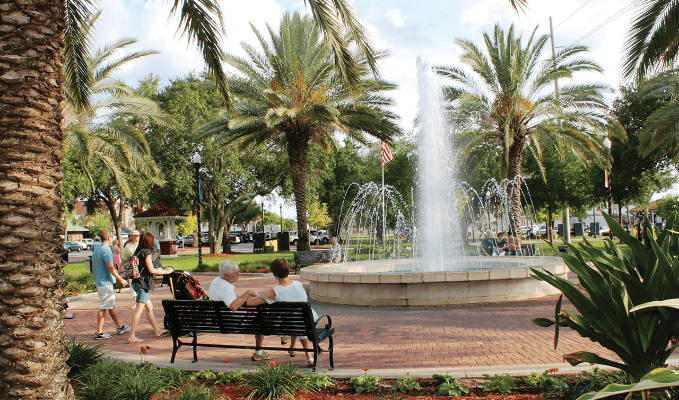 The National Main Street Approach is a four point plan by the National Trust for Historic Preservation that leverages local assets to build a sustainable community; it includes organization, promotion, design, and economic restructuring that are based in local architectural and cultural heritage and community pride. This strategy has been successful in revitalizing over 2,200 cities across the United States.

Winter Haven is a success in the revitalization of a historic district. The town is filled with arts, culture, and commerce to sustain the residents around it, even if the former Cypress Garden, now Legoland, Florida closes.

WE ARE OUR HISTORY

Without history, humans would lack identity and understanding outside of themselves. It is understanding our roots that allows us to propel forward and continue to build upon a foundation. Countless beautiful historic neighborhoods have been abandoned over the years. The efforts of artists, citizens, nonprofits, business owners, and the greater community are all needed to restore historic architectural beauty and forge a new identity.

If you choose to ignore the community, you have no right to try to run it. Contributing to your community is how many find themselves and faith in something more.

Today a revitalization project might just be a coat of paint by artists to make it look presentable. But, tomorrow it is the story of how businesses found their way back into the city center.

Rebuilding America is the most liberal and conservative thing any American can do. Believing in and building a new community in its ashes is the most faithful. We should all want some faith that began with wine and a little paint.

Joelle McTigue is a visual artist based in Los Angeles who has studied at Paolo Soleri’s Arcosanti and worked in real estate development in the Historic Core in Downtown Los Angeles. She holds a Bachelor of Fine Arts from the School of the Art Institute of Chicago.