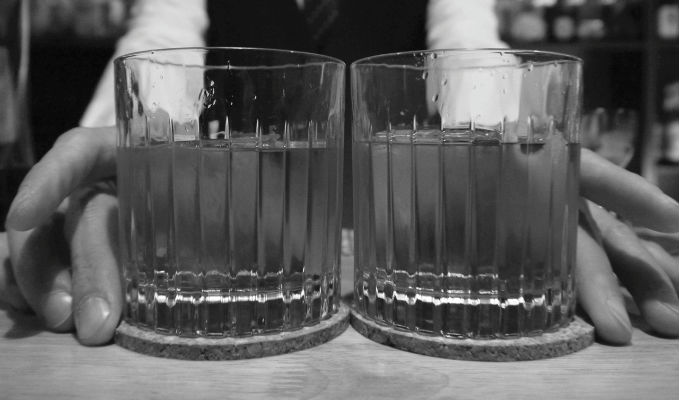 Moonshine alcohol is known by many names and its history in the United States pre-dates the American Revolutionary War. Moonshine is largely associated with its large clay jugs with a triple X mark, its Prohibition Era distillers in the Appalachian mountains, and its ties to the mob and organized crime. Yet, people are surprised to learn that making moonshine is mostly illegal in the United States.

In 2007, two men from Georgia plead guilty to operating a moonshine still in the Chattahoochee National Forest. One of them was sentenced to 35 years in prison for brewing, selling, and failing to pay taxes on those sales. According to TTB (Alcohol and Tobacco Tax and Trade Bureau) regulations, any adult can homebrew up to 100 gallons of wine or beer in a year; however, there is not a law allowing anyone to make liquor without a permit.

Several modern day investigations have led to raids and arrests in several states. An investigation in 2000, lead to the raid of a store in Virginia that sold raw materials to moonshiners. The materials sold by the store was enough to make 1.4 million gallons of moonshine with an estimated value of $19.6 million in excise tax. So, you can see why the government cares about illegal distilleries.

Moonshine and taxes actually have a deeper history, even though the full story is not entirely mainstream.

Before the Prohibition Era, moonshine was a way for families to gather and for farmers to survive. Making moonshine has been passed down from generation to generation for centuries. Farmers that had a bad crop could still make money by turning their corn into whiskey. The income from the sales made up for their inability to sell their crop as food.

The American Revolutionary War gave the United States its independence, which partly started over taxation. The newly created United States government needed a way to pay for the cost of the war. One of the laws passed was an excise tax, more specifically a federal tax on liquors and spirits.

Afraid that paying this new tax would mean that the farmers and their families would starve, moonshiners ignored the new tax. Soon the federal government sent agents, Revenuers, to collect the money from the farmers. Resenting the government for the tax, the farmers began attacking the Revenuers to ward them off from returning.

The battles that ensued became legendary stories past down through generations, but also began to turn the public’s opinion against moonshiners. Most notably, in the 1860s when the government tried harder to collect taxes to fund the Civil War. Moonshiners joined forces with the Ku Klux Klan which forced many brutal battles. Locals were intimidated, and attacks were made on federal agents and their families.

Like in the Wild West, the moonshiners of Kentucky, West Virginia, the Carolinas, and Tennessee were considered outlaws. As the Temperance Movement swept across the United States making all alcohol illegal in 1920, the moonshiners returned to favor among the population. Not necessarily for the way that they handled the government, but for their ability to supply alcohol. 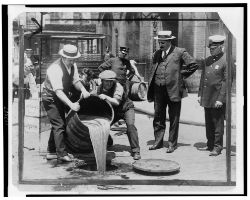 Removal of liquor during prohibition.

Working with Organized Crime outfits, speakeasies sprang up across the country. To this day, we have an obsession with the history of secret rooms, hidden doors, passwords, and escape routes. Thirteen years later, prohibition ended and the huge market for moonshine evaporated, but production continued.

Then came the indictment of 34 people in Virginia’s Blue Ridge mountains on 68 counts of illegal activity. Throughout the 1920s and 1930s, corrupt local officials accepted protection money from moonshiners. The Franklin County Sheriff, Peter Hodges, oversaw the complex bribery and extortion scheme. During the 1920s Prohibition Era, it was estimated that the unpaid excise tax in Franklin County should have generated $5.5 million for the government, over $68 million today.

The conspiracy was discovered when undercover federal agent Colonel Thomas Bailey posed as a small scale buyer in 1934. He successfully turned small time distillers into informants. After a year, he unravelled Sheriff Hodges’ payment system. Roughly six years prior, Sheriff Hodges divided the county into districts headed by deputies. Each deputy was ordered to find moonshiners and collect protection money; $25 per still, $10 per load of whiskey, and $5 per filling station.

The Great Moonshine Conspiracy Trial of 1935 was the second longest case in Virginia’s history. 176 witnesses were called to the stand by the government. One of the witnesses, Mrs. Willie Carter Sharpe, had been a driver and stated she moved more than 220,000 gallons between 1926 and 1931. The indicted included 19 moonshiners, nine government officials, and a corporation.

After a ten week trial, the jury reached a verdict within two days on July 1, 1935. Twenty of the defendants were found guilty.

Trials and arrests did not deter moonshiners. These bootleggers used everything from funeral caskets to boats and fast cars as a means to transport their goods. Illegal moonrunning proved to be excellent training ground for future NASCAR drivers like North Carolina’s Junior Johnson.

It wasn’t until the 2008 recession that states considered the legalization of regulated spirit distilleries as a new revenue source. Tennessee legalized the production of distilled spirits in 2009 and the first federally licensed moonshine distillery opened on July 4, in Gatlinburg by Ole Smoky Distillery.

HOW IS IT MADE?

North Carolina quickly followed suit, passing their own legalization, which paved the way for Piedmont Distillers in Madison that brews 100 year old recipes created by Junior Johnson’s family. South Carolina also made it legal and started taxing small distilleries in 2009 and by 2014 there were 28 registered distilleries across the state.

Even though acquiring a license for moonshine production is expensive, it is possible. Still there are many moonshiners that continue to operate outside the law. “I think there are people out there who feel that if you’re paying taxes on it, it’s not moonshine,” Ole Smoky’s founder Joe Baker told Time in 2013.

Moonshine embodies the American spirit and provides a clean base for a cocktail. It is no wonder that people across the US are buying their piece of Americana one mason jar at a time. Hootch reminds us of our rebellious nature, of the Duke boys escaping from Boss Hogg in the General Lee. One distillery even sells apple pie moonshine. Does it get any more American than that?