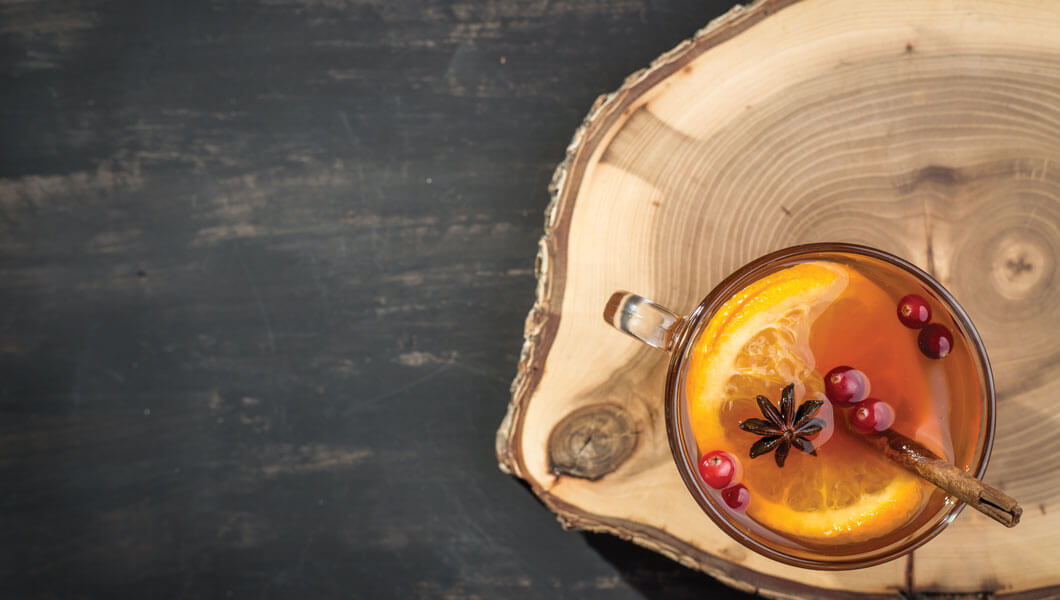 There is a rhythm and rhyme to unwinding from work. Meeting friends for post-work drinks, wrangling the little ones for a family meal, or swinging on the porch watching the sunset, our after work traditions are a part of our foundation.

You can sense the intimacy and excitement of a new season. Enjoyable nights of cool air where a beer or glass of wine are not enough to fight off the chill and allow us to relax.

In our search for the best spiked hot beverage, I corresponded with Chrissie Nelson, the blogger behind Charlotte’s Off The Eaten Path (offtheeatenpathblog.com).

Off the Eaten Path

When she’s not meeting different and interesting people through her job as an attorney and assistant public defender in Mecklenburg County, she’s meeting them in her spare time eating, drinking, and blogging her way through Charlotte.

Chrissie started the blog more than two years ago, “I was new to Charlotte and I wanted to get out and explore.” Glancing at her “Where I’ve Eaten” in the Queen City, I think her claim to be fueled by pizza, sushi, a great burger or good steak, hot wings, Mexican food, donuts, cheese, red wine, and craft beer isn’t too far off.

Her blog also gives her the opportunity to accomplish three things, unwind after work, write, and explore her adopted city, “I have always loved to write, so I wanted to chronicle my new adventures eating and drinking through my new city.”

Transitioning from public person to private person can be difficult for anyone. Grant yourself the opportunity to close the door and leave the work day behind. As a public defender, Chrissie says, “sometimes it’s hard to transition from my day job to blogging because sometimes I’m too tired from work to do anything except relax at home.”

No matter your job, position, or career transitioning out of work-mode can be a tricky task for everyone. Give yourself a purpose or a foundation to transition out of the work day. Allowing yourself the opportunity to relax will aid your ability to sustain your life and career.

Some days Chrissie will just turn on her DVR and have a glass of wine, but other days, “when I do have the energy, I love using blogging as an outlet from work. Writing is a great way for me to unwind, and I really love the community I have found through blogging. I love meeting up with my blogging friends for drinks and dinner and then writing about it.”

I asked Chrissie to imagine herself sitting on a porch swing, enjoying the early evening air. The sun setting beyond the trees, the sky turning warm colors transitioning into darkness. The day’s, the week’s worries melting away. A blanket laying over your lap to ward off the chill in the air. A warm mug in your hand that you bring up to sip. What is in the mug?

Her reply, “A warm, spiced cider.”

And with that, I found the base for a few recipes to unwind after a day’s work.

Before we can mix up a great drink, we’ll need to prepare the base. Swing by your local Farmer’s Market and pull out the trusty crock pot. Make enough for the week and store it in the fridge, so it is ready for you each evening.

Remove the apples’ cores and dice the remains

Place the cheesecloth flat on your counter

Place 2 cinnamon sticks and cloves on your cheesecloth

and tie into a spice bag with food-safe string

Add whole orange to Crock Pot (do not slice)

After 5 hours, let cool so the cider can set

Pour through strainer into a sealable pitcher

Keep in the refrigerator until you are ready to use

Make It a Toddy

Prepare your immune system for the upcoming cold and flu season and Make It a Toddy. The Hot Toddy has been used as a natural remedy to ease aches and pains associated with the common cold for decades. Unlike chicken soup, the Hot Toddy’s whiskey helps fight infection.

The alcohol works in combination with the tea, honey, lemon, and warm steam to dilate your blood vessels and open your airways. This makes it easier for your body to expel the infection causing microbes. The alcohol also helps your body unwind and sleep harder, which is what the doctor orders for the common cold.

Instead of running for a bottle of Nyquil, mix up a batch of Make It a Toddy, a local twist to the traditional recipe. We’ve made this recipe with a local North Carolina whiskey and a South Carolina tea.

American Classic Tea Pyramid Bags are made by Bigelow Tea (bigelowtea.com). Over 100 years ago, tea planters brought tea bushes to Charleston from China and India. The Charleston Tea Plantation restored the descendants of the tea bushes in the lush subtropical environment of the tea farm.

Boil water and remove as soon as water begins to boil

In a mug add a cinnamon stick

Decorate mug with lemon rind on the rim

Make It A Bourbon Sidecar

The Sidecar is a drink that is not mentioned often in pop-culture, however, it is on the Top 5 list of any good bartender. It is also a cocktail with a muddled and unverifiable history. It was created during World War I in London or in Paris… or maybe in New Orleans.

One version of its creation sets its origin in 1920’s Paris at Harry’s New York Bar. The tale is of an American Army captain who would arrive in a friend’s motorcycle sidecar. In some versions, he drove the motorcycle with a sidecar. The bartender believing the captain arrived too early for such a hard drink… or at the request of the captain… added lemon juice and Cointreau to cut the alcohol of the Cognac.

Perhaps it was invented prior to World War I, in 19th century New Orleans. In Dale Degroff’s book “The Essential Cocktail” he says that the Sidecar was the term used for the leftover liquor poured into shot glasses.

Lewis Redmond was a 19th-century outlaw, the moonshine Robin Hood. A fugitive who hid out in the Appalachian mountains. His reputation for high-quality moonshine was known throughout the land. He made home deliveries until a day in May 1876, when Deputy U.S. Marshall Alfred Duckworth confronted him at gunpoint. A few years later, he was granted a pardon by President Chester A. Arthur in 1884.

Bring apple cider and water to boil, simmer for 20 minutes

Stir and garnish with an apple slice

Make It A Quick Spike

If you want a quick drink, no problem. We’ve all been there. Pour some Carolinian Crock Pot Spiced Cider into a mug. Warm it in the microwave for a few minutes and add a bit of rum. We recommend Queen Charlotte’s Reserve by Muddy River Distillery (muddyriverdistillery.com) in Belmont, North Carolina. The dark caramel color of the rum is directly derived from aging in virgin American white oak barrels. If Queen Charlotte’s Reserve is sold out, try Muddy River’s award-winning Silver Carolina Rum.