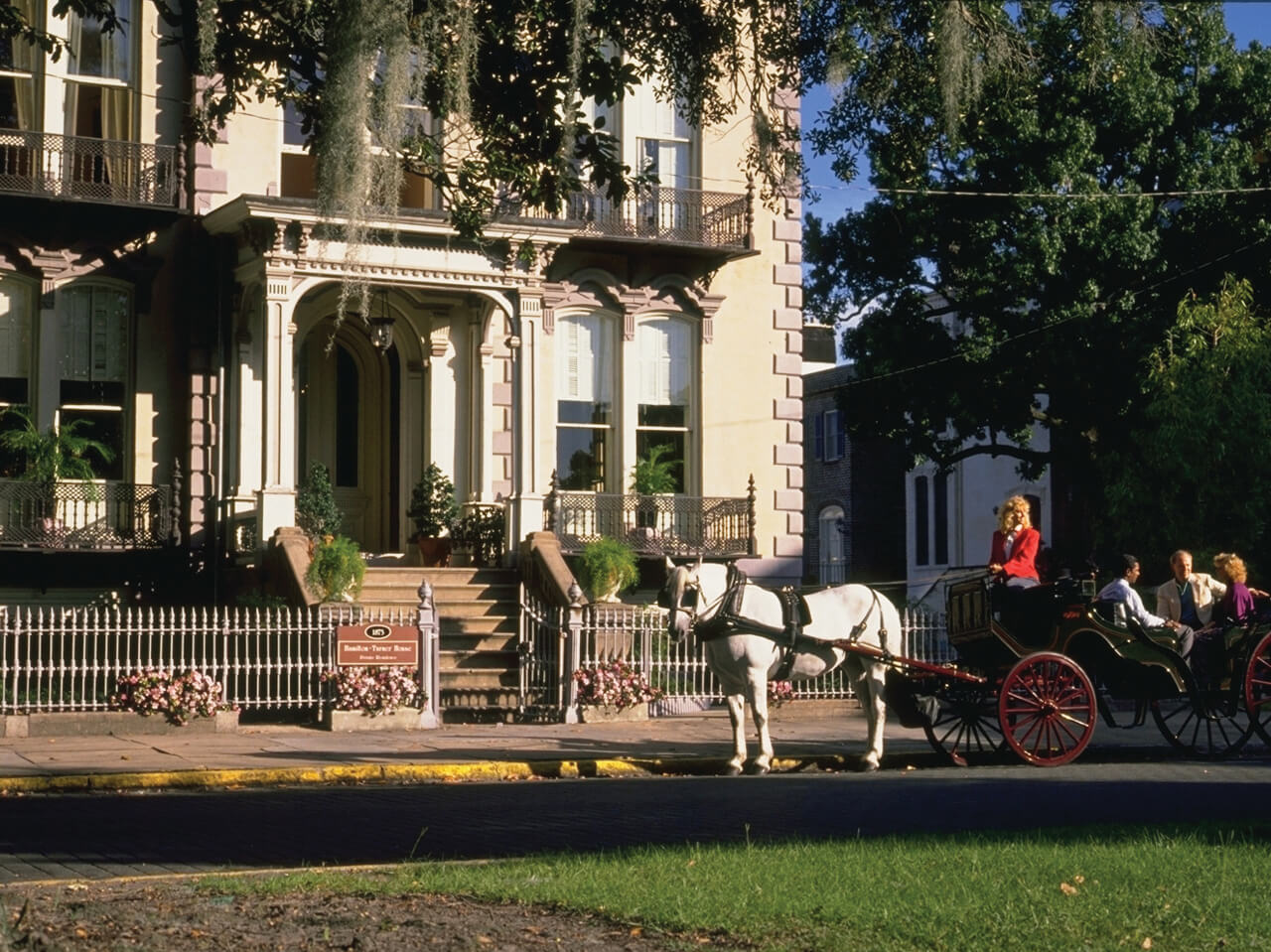 Originally published July 23, 2013, this content has recently been updated.

We awoke to the clattering sound of horse-drawn carriages, imagining the year 1733, when British General James Oglethorpe first set foot on the land that is now Savannah, Georgia. His mission: to found the first English settlement in the British colony of Georgia—named after King George II—which also became the last of the 13 original colonies that made up the United States of America. Our mission: to explore and discover what makes this Southern gem, Savannah, a fabulous weekend get-away.

The morning began with a complimentary breakfast at our riverfront hotel, the River Street Inn, a historic landmark included in the Historic Hotels of America. The River Street Inn is a former warehouse built in 1817 out of recycled ballast stone and currently hosts 86 rooms. Adjacent to the hotel is the Savannah Cotton Exchange, which was the first building in the United States to attain air rights and is one of the city’s most notable sights.

Our personal guide was waiting for us in the lobby and took us on a wonderful tour back in time. We toured through numerous historical squares, some of the most famous sites of Savannah; over 20 of the 24 original squares still exist today. Each one is characterized by a monument, statue, fountain, or bench, and is named after a person or event with significance to the city’s history. The bench where Forrest of the film, Forrest Gump, recounted his life story was located at the north end of Chippewa Square, but the bench can now be found in the Savannah History Museum. We adored the Owens-Thomas House, an English Regency style home originally built for cotton broker Richard Richardson in 1819, and designed by architect William Jay.

A must-see, especially for fans of Midnight in the Garden of Good and Evil, is the Mercer-Williams House where the historical alleged killing took place. The home was built by an ancestor of Savannah native and famed songwriter Johnny Mercer and was purchased in 1969 by Jim Williams, a Savannah preservationist. The alleged murder of Danny Hansford occurred in the study of this home. But after four murder trials, Jim Williams was ultimately found not guilty.  As we sat in the square we imagined the denizens of Savannah society arriving at the house for one of its owner’s famous Christmas parties. We searched for the Bird Girl statue as we passed by Bonaventura Cemetery, but were told by our guide that locals worried for the once-obscure statue’s safety. It now joins the bench from Chippewa Square in the Savannah History Museum.

Taking a carriage ride through town, we noticed Savannah’s abundance of majestic live oaks covered in Spanish moss, hanging like a natural sunshade. Elaborate, budding azaleas line the city’s streets and frame the squares. So beautiful and romantic, it is no wonder that this city is considered “The Jewel of the Grand Old South.” In the year 1864, lovely Savannah was presented to President Abraham Lincoln as a Christmas gift after General William Tecumseh Sherman captured the city during his legendary March to the Sea at the end of the Civil War.

The tour concluded at the rooftop bar of the Bohemian Hotel, facing the Talmadge Memorial Bridge that arches over the river. The view was even more breathtaking as we sipped on a signature martini from the bar. Back at the hotel, we enjoyed wine and champagne during a complimentary hors d’oeuvre reception.

17 Hundred 90 is a beautiful inn and restaurant located on East President Street. Would you guess that this house was built in 1790? It is one of Savannah’s oldest restaurants and inns offering fine dining and comfortable lodging, which piqued our curiosity. The service and food were phenomenal, and the staff encouraged us to walk off the fabulous dinner with a guided tour of the Inn, which hosts at least three identified ghosts. The most famous entity, Anna, of room 204 was the bride of an arranged marriage who fell in love with a sailor in the early 1800s. She is said to have thrown herself to her death from a third-floor window onto the brick courtyard as the sails of her love’s ship disappeared from sight down the Savannah River to the sea. Patrons report strange cool breezes on the back of the neck, sensations of being physically nudged, and personal items mysteriously disappearing and reappearing elsewhere. Only the bravest of tourists opt to share a few nights in room 204 with Anna.

The night was still young, so we headed to Six Pence Pub where we attended the Creepy Bar Crawl. Even more ghost stories awaited at each bar we entered as the bar crawl progressed; I feared the nightmares that awaited as I went to bed that night, but thankfully slept comfortably in our beautiful accommodations.

Heading home the next morning left us overflowing with lasting memories of this beautiful jewel of the Grand Old South with its cobblestone streets, blooming squares, European colonial architecture, and the ghosts that will (hopefully) stay behind.

Ellen Rauchhaus, a native European, is a travel consultant for almost twenty years, a river cruise specialist and the owner of European Delights by TripDesign.