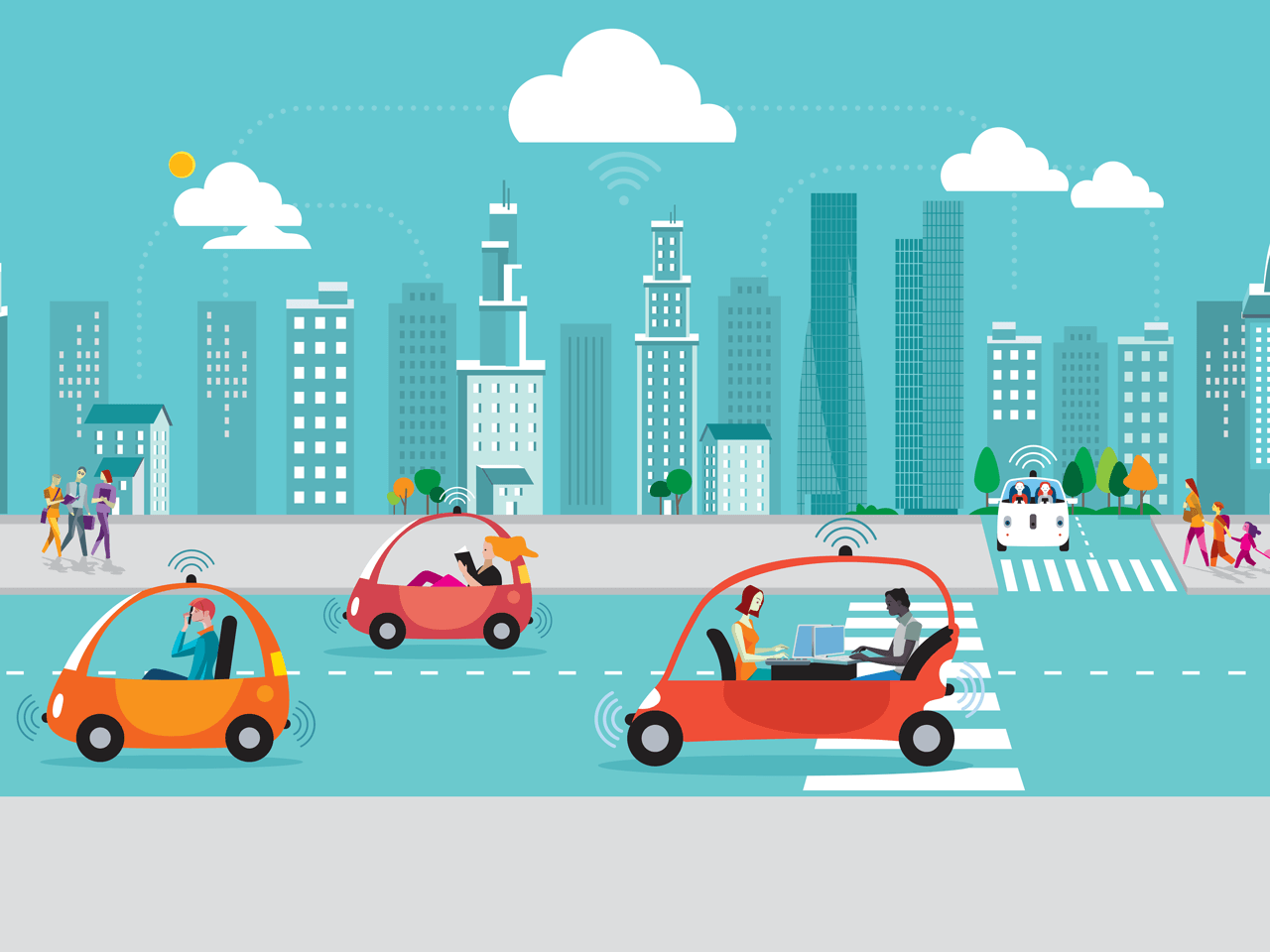 In a moment, I’m going to ask you to shut your eyes. Before you do, think of a busy day of errands that you need to complete before, during, or after work. For example, the postman left a notice for a package pick up at the post office, you need groceries for dinner, your meeting that friend for lunch, your daughter needs a new pair of cleats for soccer, and your son needs to be shuttled to and from daycare.

Get in your car and mentally walk through the motions. You get in, put your seatbelt on, and turn the car on. Now, shut your eyes and travel the route to accomplish your errands. Was the mental journey serene or was it frustrating? Did you zip through traffic and enjoy driving for the first time in ages? Or, did you have road rage because you even added that horrible intersection that traps you at the red light every time?

The average American commute is 52 minutes round trip. Collectively, we spend 3.4 million years commuting every year. The majority of us commute alone, guzzling coffee, listening to talk radio, increasing our blood pressure, and developing severe back problems. And, we do it in cars that have the ability to go over 100 miles per hour, but usually trudge along no faster than we did sixty years ago.

The solution has always been to add more lanes to existing roads or build more roads. Our roads are clogged and no matter how many more roads or bypasses we build, the problem will still persist. Our solution has not been a solution thus far, so perhaps it is time for innovation. What would happen if we become a driverless society?

Remove the need for traffic lights, double yellow lines, speed limits, or bypasses. If we removed the elements of human error and blind spots, could we live in a world where our commutes are reduced to five minutes for every thirty minutes it would take a human driver?

If you could live in a world where the average American commute was 9 minutes, how would you spend the extra 43 minutes of your day? Would you sleep longer, read to your kids, spend time with your spouse? There are a lot of things we need and time is always at the top of the list.

How much time would you save if you could arrive to each location within five minutes?

You might be surprised to learn that semi-autonomous vehicles have been on the road since 2014. In Pittsburgh if you hire an Uber, it might be a self-driving vehicle.

If you have $90,000, you could buy a Tesla Model S with the optional Enhanced Autopilot and Full Self-Driving Capability. Google has worked on their self-driving car project since 2009 and several of the major car manufacturers have tossed their hats in the ring as well.

Uber hired researchers from Carnegie Mellon University’s Robotics Institute in early 2015 to develop their self-driving vehicles. The city’s Mayor William Peduto, initially, opened up the city to the project, “Pittsburgh and, in particular, Carnegie Mellon University have been leaders in autonomous vehicle research for decades and this is a logical next step.” Pittsburgh provides the right types of challenges in developing a vehicle that needs to learn how to react to a multitude of scenarios. More than just experiencing the weather of all four seasons, Pittsburgh is an older American city. That means that Uber’s car will need to learn to navigate old bridges, an irregular street grid, and lots of potholes.

Raffi Krikorian, director of Uber’s Advanced Technologies Campus, said “We like to call Pittsburgh the double black diamond of driving.” He feels confident that if they can master Pittsburgh, then they can have a great chance of mastering nearly any other city in the world.

Between December 2016 and January 2017, Uber may have used up all their goodwill. In December they began testing in San Francisco without a permit and were sent a cease and desist letter by the Department of Motor Vehicles. By the end of January, Peduto publically called out Uber, “We’ve held up our end of the bargain, but we haven’t seen much from Uber. This is a two-way street, not a one-way. I need to see more interest from them in our communities, both locally and internationally.”

Michigan Governor Rick Snyder signed a series of bills, known as the SAVE Act legislation, in December 2016 to allow autonomous vehicle testing on their public roads. General Motors tests more than 40 cars in California and Arizona and, with the new laws in Michigan, they immediately began testing in metro Detroit. The city will become their primary location for development of autonomous technology in winter climates.

According to CEO Mary Barra, the Orion Township assembly plant, the same factory that produces the Chevrolet Bolt, will produce the next generation of autonomous test vehicles. “We expect GM will become the first high-volume auto manufacturer to build fully autonomous vehicles in a mass production assembly plant,” Barra stated during a press conference that was livestreamed on Facebook.

In the first half of 2016, General Motors acquired three-year-old Cruise Automation, a San Francisco-based developer of autonomous vehicle technology, for $1 billion. In recent months, the new GM division announced they developed a mobile app that allows users to request rides from a self-driving Chevrolet Bolt EV. Current employees use the app to request a ride from their home to the company’s office.

General Motors aggressive moves into autonomous cars also includes a partnership and $500 million investment into Uber competitor Lyft and the creation of an engineering team dedicated to autonomous driving.

Google’s self-driving car project became Waymo, a subsidiary to Google’s parent company Alphabet, in December 2016. In January, the new company announced their Chrysler Pacifica minivans were ready for public road testing in California and Arizona. They gave the public the first look at the self-driving minivans at the North American International Auto Show.

For the first time, the company will be producing all of the technology, from the cameras to the sensors, in-house. This will allow Waymo to exert more control over the precision of the hardware and the ability to lower the cost of the minivan in the future.

CEO John Krafcik recently said that by building their own LIDAR (Light Detection and Ranging) sensors the company shaved 90 percent of its costs. Statistics released by California regulators show Waymo’s technology is far more comprehensive and mature than its rivals. Driving safety situations that required human intervention occurred only 0.2 times per one thousand miles driven. There are no federal regulations on self-driving vehicles, however, California requires permits and reporting of autonomous vehicle testing. The reporting requirements allow a unique opportunity to make side-by-side assessments, at least for the companies that test within the state.

Mike Ramsey, a car analyst at Gartner, said there is an “enormous difference in both miles driven and performance between the Google Waymo system and everyone else.” Of the nine companies testing in the state, BMW followed Waymo with a required 1.6 human interactions, whereas Mercedes Benz required 499 interactions per one thousand miles driven. This is the most comprehensive look at the state of autonomous technology available today.

Autonomous Cars of Near Future

We might not see the 9 minute commute in the next decade, but some driving pressures could be alleviated. A commuter could use the time to remote work an hour a day, so there is an extra hour of family time every night. Or, just use the time to meditate and release the stresses of the world in an autonomous sound bath.

Over the next decade while regulations catch up to technology and technology continues to reduce the need for a human driver, we will grow accustomed to seeing autonomous vehicles. We will even be willing to relinquish control of the wheel full-time. When we are able to tell the car where to go and sit back, we will be able to deconstruct the double yellow lines, the speed limits, and even the parking headaches. You may find it hard to imagine living in a world where your driving test is not about verifying that you understand road signs or how to parallel park. In the future, you may need to simply identify the buttons on the dashboard and display your ability to pull off a three sea shell evac emergency.

Simon Johns was glued to the television watching old black and white movies as a kid. He’d run around the house pretending to be a reporter with a piece of paper tucked into his hat. Simon’s mom bought him a Remington 5 when he was 12. If you hear a typewriter at your local coffee shop, Simon asks that you refrain from breaking his concentration. Creative types, am I right?